What it was supposed to become

We wanted to create a dedicated space for training parkour and other movement arts. Stavanger didn’t have one yet, and as far as I knew there wasn’t a single city in Norway that offered an indoor training space dedicated to Parkour. We wanted a place where we could train through the cold, wet winter months to keep the training intensity up regardless of the weather.

We needed to find a space with enough roofheight and enough surface to both do running starts and climbing, wallruns etc. We also needed the surface to be able to withstand heavy equipment, running and falling, so we started looking for a storage building of some sort. Luckily, Stavanger is one of Norways biggest cities, so there was actually quite a lot of storage buildings and workshops to choose from. We started collecting data by noting down buildings and areas where we thought we would have a chance at renting and where it was easy to get to by bus or bike. After we had found a few that were decent sized and close to the city, I started calling around to find the owners. It can be a bit tricky to find the actual owner of a property since a lot of companies only rent the buildings they are located in, so I had to note down who I was calling and who they asked me to call to finally get to the ones who could actually answer me about renting their propert. The first property I found was a storage facility and workshop for a national agricultural company, but their rent was too steep. Second, my friend Helge and I had a chat with the management of a local CrossFit gym to see if we could fit in with them. We decided not to, because their facility was already pretty crammed up with their gear, and their schedule was pretty full, leaving us with odd hours and little space. The third and final choice was two rooms under a bridge that the railroad company owned. They were planning on demolishing the bridge within a year or two (but it often takes a lot longer), bit we were allowed to rent it until they begun the work. We happily rented it for about 2500 NOK pr month. It was perfect for us, a concrete room that we knew were going to be demolished, so we could drill into the walls and build things as we saw fit!

In the beginning it was only Helge and me. We came up with the original plan, and we thought we could manage running the business ourselves. He already had a one man company that we used to rent the building, he had experience from running a bath supply store earlier and he had lots of experience as a handyman. We ended up being a team of four just before we opened the doors to our first customers as we included Quentin and his girlfriend, Parinaz. Parinaz had a degree in marketing and Quentin, like me, was a programmer. Helge, Quentin and me had several years of training parkour and other movement sports that we could use for this business.

The inside was filled with crap. Old materials, a bar, posters of half naked ladies and Somme furniture that definitely had seen better days. The property manager told us that a biker club had rented the property earlier, which made sense…

We tore the bar apart, sorted the material into two piles: crap and useful, and got rid of everything we didn’t need. Helge put up his monkeybars, and we got hold of some additional materials to construct boxes, ledges etc. to climb and jump on. Our goal was to open in just a month, so we didn’t have too much time to finish construction. After several late nights of construction, painting and cleaning, we were able to finish in time for our planned opening date with the first indoor parkour gym in Stavanger.

On the day we opened we had about 30 people visiting the gym. Some of them complained about lack of space, but most were very positive that Stavanger finally had something like this to offer! The day went past in a flash, and we started normal operation the following week.

After the kickoff we were in business! Four nights a week, for 5 hours each night, we were open for visitors. In the beginning we had a large variation in number of visitors, and after a few weeks we landed on having 3-6 visitors each night that normally stayed from the minute we opened until we pushed them out the door. We offered two different payment options: 300 NOK a month for free access, or 50 NOK each visit. We wrote down name, name of next to kin, and phonenumber for each visitor, and clearly stated that training was at their own risk. I know now that we should have had an insurance plan that would have covered us if someone had injured themselves badly at our gym, because we were actually responsible for all the people swinging from metal bars to wooden crates over concrete floor all the time they were there.

We made a facebook page for the gym and shared it on our personal facebook-walls. That was all the advertising we ever did. It kept us afloat with a little profit. Most of the posts on the facebookpage was written by me, and was pictures or short videos of people training at our gym (with their consent, of course). Easy marketing!

We also created a website using www.one.com and wordpress to have a landing page if anyone searched for parkour in Stavanger, and we cross linked everything between facebook and the website to make sure you would find everything regardless of where you found us first. On the website we launched an advent calendar that consisted of basic parkour movements and workouts to complete with videos that showed the movement. I’m not sure how many actually saw or spent time doing these exercises and workouts, but at least we were able to push some content for the website.

Shortly after opening the gym, I got a joboffer from one of the leading IT consulting firms in Norway. I had been out of work for four months, and was feeling the urge to make a better salary. Our plan with Paradise Parkour was to evolve into a larger gym where we could have evening classes, host classes of different disciplines than parkour and freerunning, and even rent the gym out for teambuilding and parties. I took the job offer, and started working as an IT-consultant by day, and gym manager at night. Things were good! The gym kept its customers, and we started planning how we could expand our service to increase the income.

Unfortunately, as summer approached, we started loosing customers. The weather got better, and people started training outside instead of using our gym. We still got customers when the weather was bad, but now we barely made rent. We also knew that we would have to find a new location for our gym as the railway company gave us just half a year until they planned to demolish the bridge.

We had been talking about our situation and how we should handle it before, but now we had to make a decision: should we give it everything we had and try to make enough profit to pay us salary, or should we call it quits and end without risking economical losses?

Given that our current revenue was just barely enough for rent, we chose to close business. It might have been a bit shortminded of us when I think about it now, because we were onto something good, but at the time it was the safest decision. We sent a notice on the Facebook group a few weeks before closing date, and another notice the day we closed shop. Then we had another couple of weeks with tearing down and cleaning out before we handed back the keys.

As I mentioned earlier in this post, even though the railroad company planned on demolishing the bridge within a year, it sometimes takes a bit longer. We rented from fall 2015 to summer 2016, and the bridge is still standing in 2019.

This was a very good learning experience for me, and the second business project in a relatively short time. It was something completely different from SkyDrone.

It is very important to have the right team of people when starting a business. In my opinion, all four of us were able to communicate well and had good idea sparring sessions. Even though some had more experience than others, we were able to capitalise on the diversity we had and made things work.

If you need to build something, make sure you have a friend with power tools! Also, use scraps wherever possible, no need to pay for overpriced materials as long as it’s strong enough. We used a lot of scrap on the inside of the boxes, and covered them with plates and painted them afterwards.

Find a good payment solution. We deliberately chose to have the two options we had, as one is clearly a lot more beneficial than the other. This way, we could almost be certain that our customers chose the cheapest plan for them, which made sure that we got paid larger sums in advance. That made it easier to see if we could make rent early in the month.

Use word of mouth as advertising, and create a Facebook page. Since many of our customers were still in school, we benefited from them talking to their classmates about what they had done at the gym the day before. The word about the gym spread pretty quick. The Facebook page helped a lot too, since we made it possible to share videos and pictures front the gym on Facebook. We quickly got a few followers on the page and had a good amount of activity.

We should have had more transparency between us regarding the economy. Only one person took care of the actual accounts, and we should have shared that load between us. It is important that everyone is in the loop regarding the status of the company, at least when we’re that small.

Make sure you’re covered legally. Having 6-10 kids doing flips on concrete is a recipe for disaster, and we should have made sure if we needed an insurance policy and gotten it. We risked having to pay all medical bills from our own pockets if someone had injured themselves at our gym.

Set rules and make procedures. Keep things simple to avoid confusion, and even with such a small team it is beneficial to have things in writing to make sure everyone is doing things the same way. This can be anything from opening and closing procedures, how to handle the customers, economics etc.

Strip away the fat. Keep your workload as small as possible and avoid spending time on unnecessary things that doesn’t benefit the company directly. We didn’t need the website for instance. It was nice to have, but an added expense. We could have made it just as well with just the Facebook page. If we had continued business and tried growing it, we probably would have benefited from the website for selling merchandise, booking, information etc.

So there you have it. I started and ran a parkour company with four friends, made it profitable and ended it with lots of new experiences! I’m looking forward to the next business project! 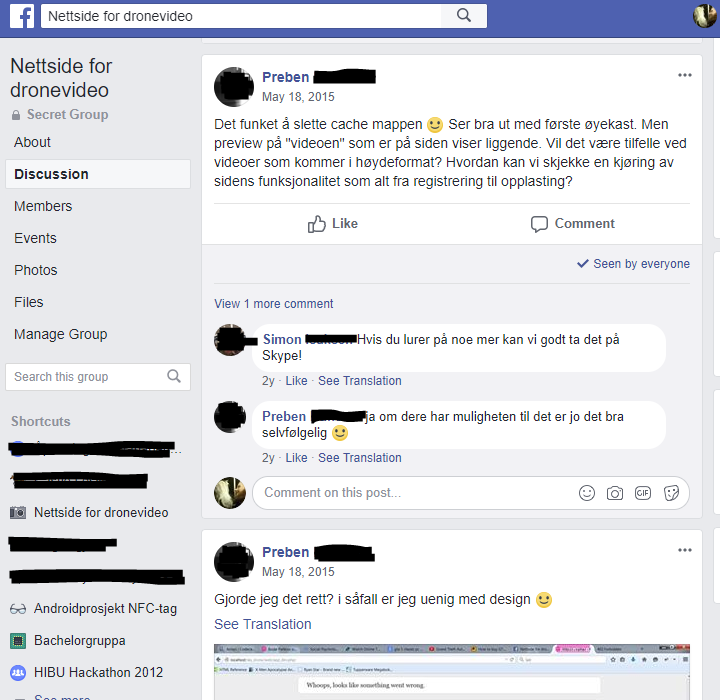 I tried to create an online business with a good friend of mine. We outsourced the idea and failed! Here is our story and what we learned!