It took me a long time, but yesterday I finally found the guts to take Nova for a trailride again. I’ve been very on and off when it comes to riding her, especially after she started bucking in early December 2018. Our gut feeling was an aching back combined with too little training and that it made her a bit more stubborn than usual. It’s no secret that she’s pretty quick to store energy and become a bit more mare than I like. We’ve kept a close look on her back in December and done some work from the ground, and I’ve never been scared of handling her from the ground, but it’s obviously not been enough to keep her fit.

The ride started with an energetic horse that walked of in the wrong direction, straight towards the pastures. Not even her own pasture, but to the other horses. Probably not satisfied with having only me as company. My plan was to ride her on a short loop around the stable managers estate. It’s a gravel path that runs alongside some huge fields used to grow different kinds of corn. It’s a nice and safe path since there’s very few others that use it except for the occasional tractor, rider and trotter with carriage. Nova had absolutely no interest in going there. Not the tiniest bit!

The beginning of the trail goes past a barn with a few wagons and machinery in it, then past some pastures and a pigsty. Both our horses seem to have issues going past the barn and the pigsty, and especially when I ride them.

When we were almost at the barn, she froze and pinned her ears. Nothing I did from the saddle would make her move, and I was not going to get off her to lead her past the barn and pigsty (although that would probably have been the best solution for us both), so I persisted in applying the aids to get her to move forward. She gave me one foot forward, I gave her lots of praise, and we started walking a different way than what I had initialy planned.

The day before my girlfriend and I drove the backroad from our stable to the road back to Stavanger. It’s a partail tarmac, partial gravel road that her Polo just barely managed to drive without hitting the exhaust to the ground. But since Nova didn’t want to go the route I had planned, and the other route was equally good, just different, I decided that we would go that way instead!

Nova was suddenly a lot more eager to walk, no scary buildings or pigs to bother her. I was a bit worried since we had never walked there before, but sometimes you just have to wing it.

When we bought Nova, her previous owner told us she loved trailrides. It clearly showed yesterday! Her ears were traveling from side to side, and pinned forwards, eager to walk and explore.

After around 20 minutes, we got to a small road and I decided to walk down it instead of turning around and walk the same way back. I pulled up my phone and filmed just a few seconds of our trail ride in the sunset.

Our only incident during the entire trailride occured just after I put my phone down again. I noticed that Nova had sensed something behind us. I turned around and saw a small, but loud, scooter driving towards us. I used my arm to communicate to the scooter to slow down, but the driver didn’t understand or didn’t care, so when it was just beside us, Nova sat down and boltet into a few steps of gallop on the tarmac. No harm, but it definitely raised my heartbeat! Nova got very eager to get back home (or at least away) after the scooter, but we managed to walk pretty calmly back to the stable and finish the ride with a smile and a couple more courage points to both of us!

I’ve introduced her to a lot of new stuff since we got her, from wagons, umbrellas and tarps, to jumping around her, ballons and cars, but it is quite evident that she still does not have confidence in me as a rider. Probably because I’m not totally confident as a rider myself. Strange how that works. 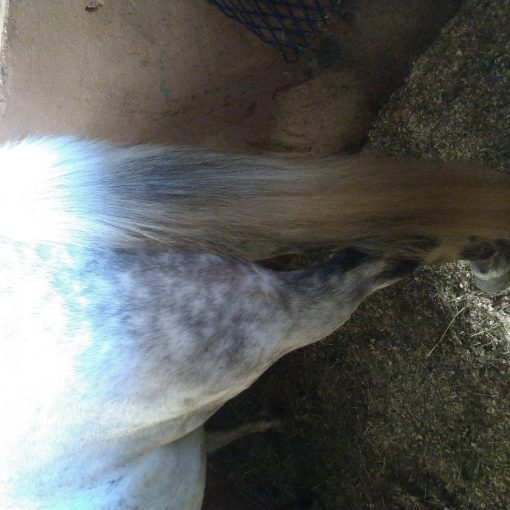 Nova is a really beautiful horse, with her white fur, silvery mane and shitstained tail… She has a tendency to push her […]